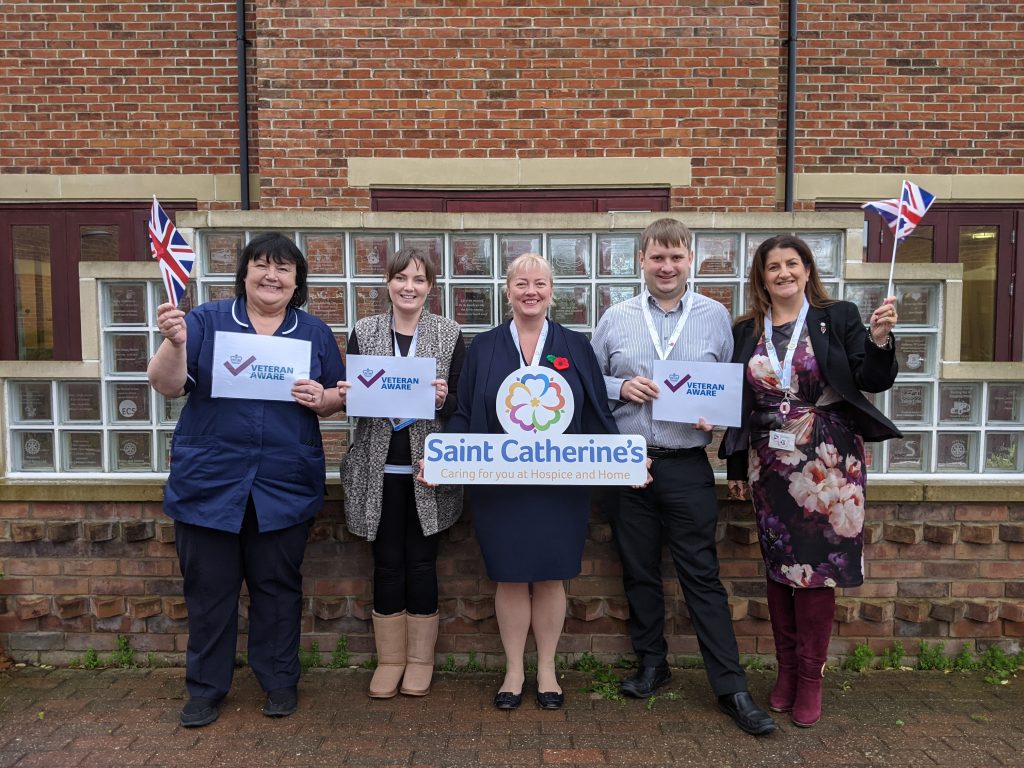 Saint Catherine’s Hospice in Scarborough has been awarded Veteran Aware status – making it the first hospice in the country to receive this accreditation.

The hospice has been formally recognised as Veteran Aware by the Veterans Covenant Healthcare Alliance (VCHA), a group of NHS healthcare providers in England committed to providing the best standards of care for the Armed Forces community, based on the principles of the Armed Forces Covenant.

The aim is to develop, share and drive the implementation of best practice that will improve armed forces veterans’ care, while at the same time raising standards for everyone.

Saint Catherine’s identifies veterans as soon as they are referred or admitted as a patient to ensure they receive the right care and support. The hospice has appointed Veteran Aware champions and has started reaching out to work with local armed forces organisations. The charity has also shared information and useful links with its staff to share with veterans who may need signposting towards additional support.

Michelle Muir, clinical director at Saint Catherine’s, said: “We are thrilled to be named as the country’s first Veteran Aware hospice and very proud to be recognised for our efforts by the VCHA. Our aim is to provide the highest standard of care possible and recognising the needs of veterans and their loved ones is an important part of that.

“We also have many staff and volunteers who are part of the armed forces family, so being Veteran Aware as a hospice will ensure that they are supported and recognised too.”

Tony Armstrong, VCHA projects lead, said: “It has been a pleasure to work with Michelle and her team to support Saint Catherine’s through this journey. I look forward to working with them to support the local veteran and armed forces community in the future.”

The Veteran Covenant Healthcare Alliance is committed to improving armed forces and veteran care whilst raising standards for all.

In England, 129 NHS providers are now Veteran Aware accredited, and the alliance aims to have all trusts in England accredited by March 2023 at the latest.

The VCHA programme has now received clear direction, by Central Government, in the Veterans Strategy Action Plan 2022 – 2024, to widen scope and to pilot the accreditation of both the independent sector and hospices.